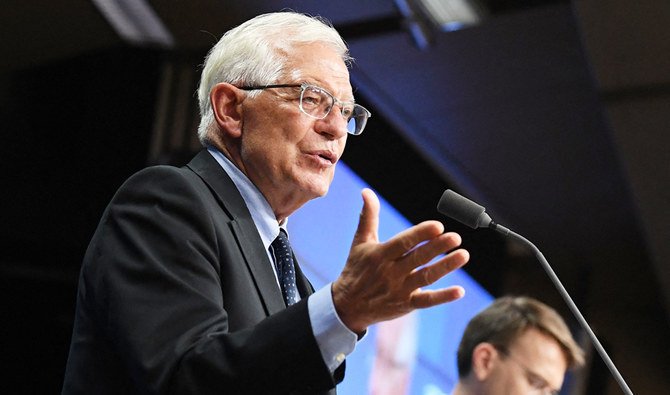 Borrell said that “the situation in Lebanon has not improved” since his last visit to the country three weeks ago.

The German news agency (DPA) said that the council may formally agree to adopt sanctions against Lebanese officials, who they consider undermining democracy in the country.

But the agency added that EU diplomats were “divided over the possibility of adopting sanctions, as a result of several notable technical and judicial points”.

Meanwhile, a diplomatic meeting was held in Beirut between the Ambassador of the Kingdom of Saudi Arabia to Lebanon, Walid Abdullah Al-Bukhari, the US Ambassador Dorothy Shea, and the French Ambassador Anne Grillo.

The meeting at the Saudi embassy comes days after meetings between the US and French envoys in Riyadh with Saudi officials to develop a joint action plan for humanitarian and food aid for Lebanon.

The United States and France are seeking to incentivize the provision of aid to Lebanon to protect the stability and the Lebanese army, in light of two separate statements issued last week by the American and French embassies in Lebanon.

Diplomatic efforts escalated amid the acceleration of the economic collapse in Lebanon and the fear that the situation could descend into chaos.

Blinken tweeted: “Important discussion with my Saudi and French counterparts, @FaisalbinFarhan and JY_LeDrian, regarding the need for Lebanon’s political leaders to show real leadership by implementing long-awaited reforms to stabilize the economy and provide much-needed relief to the Lebanese.”

In a statement issued after the tripartite meeting, the Saudi embassy said that the discussions “focused on the most prominent political developments taking place in the Lebanese and regional arena, in addition to issues of common interest.”

The US embassy tweeted that diplomatic consultations focused on “the dire economic situation in Lebanon and how to provide the most effective support to the Lebanese people.”

The Banque du Liban assured that “Lebanon’s gold is fine, it has not been touched, and it will not be touched.”

The bank added that gold “is not subject to any pawn or covenant, as some may dream, with the intention of continuing to flood Lebanon and harnessing what is still owned by the country for purposes that harm Lebanon and do not serve its interests at all.”

The Banque du Liban stressed that it will also maintain the mandatory reserve.

She said that the solution to revive the Lebanese economy is for political officials to assume their responsibilities in forming a new government that implements the required reforms and restores confidence both internally and externally.

Lebanon is witnessing the worst economic crisis in its modern history.

The national currency lost more than 95 percent of its value against the dollar, which touched 20,000 Lebanese pounds.

Meanwhile, the Ministry of Health announced an investigation into the death of a girl whose family said she was unable to obtain proper treatment amid an acute shortage of medicine in Lebanon.

Gauri El-Sayed died on Sunday at the age of 9 months in the southern town of Anout from pneumonia. He claimed that the hospital lacked medication to treat the infection. She suffered from a very high temperature. Baby Gauri was taken to a hospital that lacked the necessary pediatric care.

The tragedy constituted a new source of anger for the Lebanese.

On Sunday and Monday, many activists, including doctors, announced on social media their intention to emigrate “because the state is killing its own people.”

Hamad Hassan, Minister of Health in the caretaker government, met with a delegation from the Syndicate of Drug Importers and Pharmacy Owners in Lebanon.

Member of the Syndicate’s board of directors, Marwan Hakim, said: “Importers are suffering from technical and financial problems related to transfers that the Banque du Liban must issue to companies abroad, as these transfers have stopped since May 7.”

Al-Hakim said: “If the problems are not solved, there will be no medicine left in Lebanon.”

Pharmacies returned to work on Monday after an open-ended strike that lasted for several days, although its goal of improving drug availability in pharmacies was not achieved.

A statement from their group said pharmacists could strike again if the health minister did not fulfill the obligations.

She added that the pharmacists are waiting for “the minister’s fulfillment of his pledge to issue detailed instructions for medicines based on the agreement between the ministry and the Banque du Liban.”

It is expected that this agreement will allow importers to release and distribute medicines to pharmacies, especially those that treat chronic diseases, inflammatory medicines, and pain relievers.