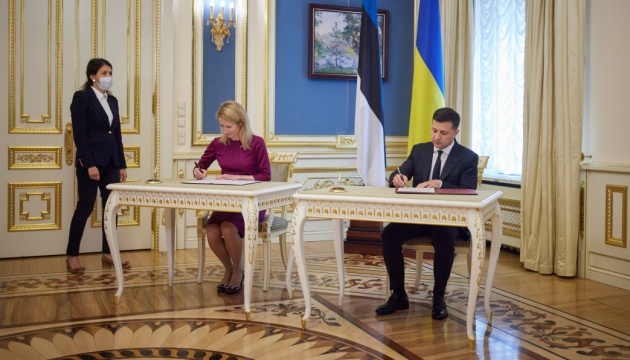 on: May 22, 2021In: Diplomatic affairsNo Comments
Print Email

Ukraine’s President Volodymyr Zelensky and the Prime Minister of the Republic of Estonia Kaya Kalas signed a joint statement on priorities for bilateral cooperation, which indicated Estonia’s willingness to support Ukraine’s future accession to the European Union.

During the meeting, Zelensky thanked the Estonian side for its continued support for Ukraine’s sovereignty and territorial integrity, especially in the context of Estonia’s non-permanent membership in the UN Security Council in 2020-2021.

“I know that you were yesterday in Donbas, I thank you for this on my own behalf and on behalf of all the citizens of Ukraine,” the president said.

“It is important for me that the leaders of other countries come to see with their own eyes the situation in Donbas, and to see our attitude towards the citizens living in the territories controlled by the Ukrainian government,” Zelensky added.

He also thanked Estonia for its continuous assistance in the medical rehabilitation of Ukrainian soldiers and for the allocation of 500 thousand euros in humanitarian aid to the Donetsk and Luhansk regions.

The President indicated the Estonian side’s readiness to join cooperation within the framework of the Crimean Platform Summit in Kyiv on August 23, 2021.

For her part, she thanked Kalas Zelensky for the warm welcome. “Ukraine is always at the heart of the Estonian people. We always do our best to support Ukraine on all possible platforms – the European Union, NATO, and the United Nations. ”

The interlocutors paid special attention to Ukraine’s priority steps towards deepening relations with the European Union.

Zelensky stressed Ukraine’s strategic goal of full membership in the European Union and thanked Estonia for its traditionally active support in achieving this ambitious mission.

After the talks, the President of Ukraine and the Prime Minister of the Republic of Estonia signed a joint statement on priority areas for bilateral cooperation. The document separately indicates Estonia’s willingness to support Ukraine’s future accession to the European Union and its willingness to assist our country in meeting membership criteria.