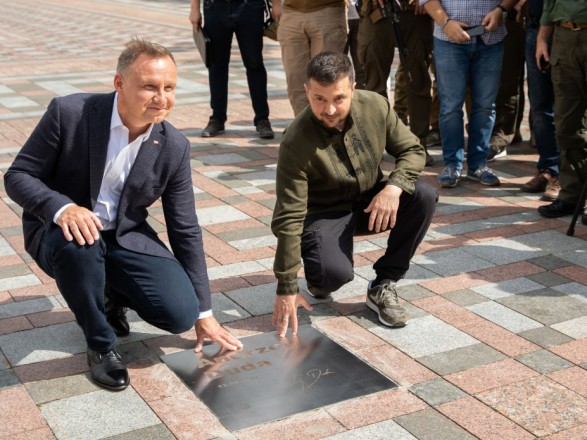 For friends of Ukraine: Zelenskyy and Duda opened the Alley of Courage in Kyiv

President of Ukraine Volodymyr Zelenskyy and President of Poland Andrzej Duda opened the Alley of Courage in Kyiv, where true friends of our state will be celebrated.

“President of Ukraine Volodymyr Zelenskyy and President of the Republic of Poland Andrzej Duda took part in the opening of the Alley of Courage on the Constitution Square in Kyiv,” the message says.

The alley was laid on the occasion of the 31st anniversary of Ukraine’s independence. As noted, the place was not chosen by chance. It was on the Constitution Square opposite the Verkhovna Rada that modern independent Ukraine was born.

Zelenskyy stressed that the names of political leaders and other representatives of partner countries that have been providing important support to Ukraine since the beginning of a full-scale Russian invasion will be engraved on this Alley.

The first foreign leader on the Alley of Courage was Polish President Andrzej Duda.

“Today I want to open the Alley of Courage in the presence of Polish President Andrzej Duda. His name will always be on this Alley. It is a symbol of courage, a symbol of friendship, support for Ukraine when it is really needed,” Zelenskyy said.

Andrzej Duda played a particularly important role in strengthening Ukraine’s defense capabilities in the early days of a full-scale Russian invasion. He arrived in Ukraine, called Russia’s actions an unprecedented violation of international law and stressed that by doing so it excludes itself from the international community.

Poland was one of the first EU countries to become a new home for millions of internally displaced persons from Ukraine. The Polish government and the Sejm have simplified as much as possible the procedures for crossing the border and further including Ukrainians in a friendly European community.