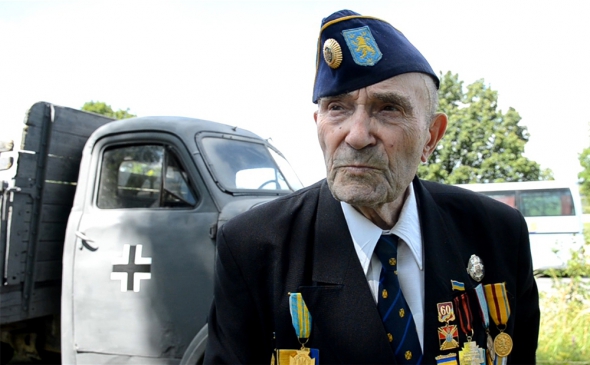 Awarding Mykhailo Mulyk the Title of Hero of Ukraine

Awarding Mykhailo Mulyk the Title of Hero of Ukraine!

on: January 29, 2021In: Ukraine society and cultureNo Comments
Print Email

Oksana Savchuk, a member of the Verkhovna Rada said that Mykhailo Mulyk, a veteran of the Halychyna division, will be awarded the title of “Hero of Ukraine”.

The request was supported by a majority vote of the Verkhovna Rada.

“Parliament majority vote supported my request to the title to Michael Mulyk Division title Hero of Ukraine pleased that Parliament understands feat Division and their invaluable contribution to the preservation of Ukrainian statehood! Glory to the Heroes of Ukraine “, – said Savchuk.

Mykhailo Mulyk is a Ukrainian public and military figure, a soldier of the SS Halychyna division, a prisoner of Soviet concentration camps, a longtime head of the village of the Halych Brotherhood of former soldiers of the 1st Ukrainian division of the Ukrainian National Army, an honorary citizen of Ivano-Frankivsk, the last combatant of the SS division. ” in Ivano-Frankivsk.

He was born on October 28, 1920, in the village of Horozhanka, Monastyrysky district, Ternopil region. Father Ivan was a deputy chairman of the Ukrainian Sich Riflemen. In 1937 he became a member of the Organization of Ukrainian Nationalists.

On her assignment, in September 1943 he joined the ranks of the Ukrainian division “Galychyna”. Served as a radio operator. He took part in the battle of Brody in July 1944. He was taken prisoner by the Soviets. He was interrogated for two years in Moscow’s Lubyanka prison. They were imprisoned for 10 years and civil rights for five years. He served his sentence in coal mines in the Moscow region and in the Komi Republic.

He returned from exile in 1954. He settled in Stanislav, now – Ivano-Frankivsk. He worked as an accountant in the production association “Prykarpatlis”. In 1989 he became a member of the cultural and scientific society “Movement”. He was an accountant of the liquidation commission of the city committee and the regional committee of the CPSU. In 1991 he organized the Society of Political Prisoners and Repressed. Within a year, together with divisional commander Volodymyr Malkosh, he founded the Brotherhood of Former Soldiers of Halychyna. He wrote eight books on the liberation struggle of the Ukrainian people and the establishment of independence. He died at the age of 99 in January last year.